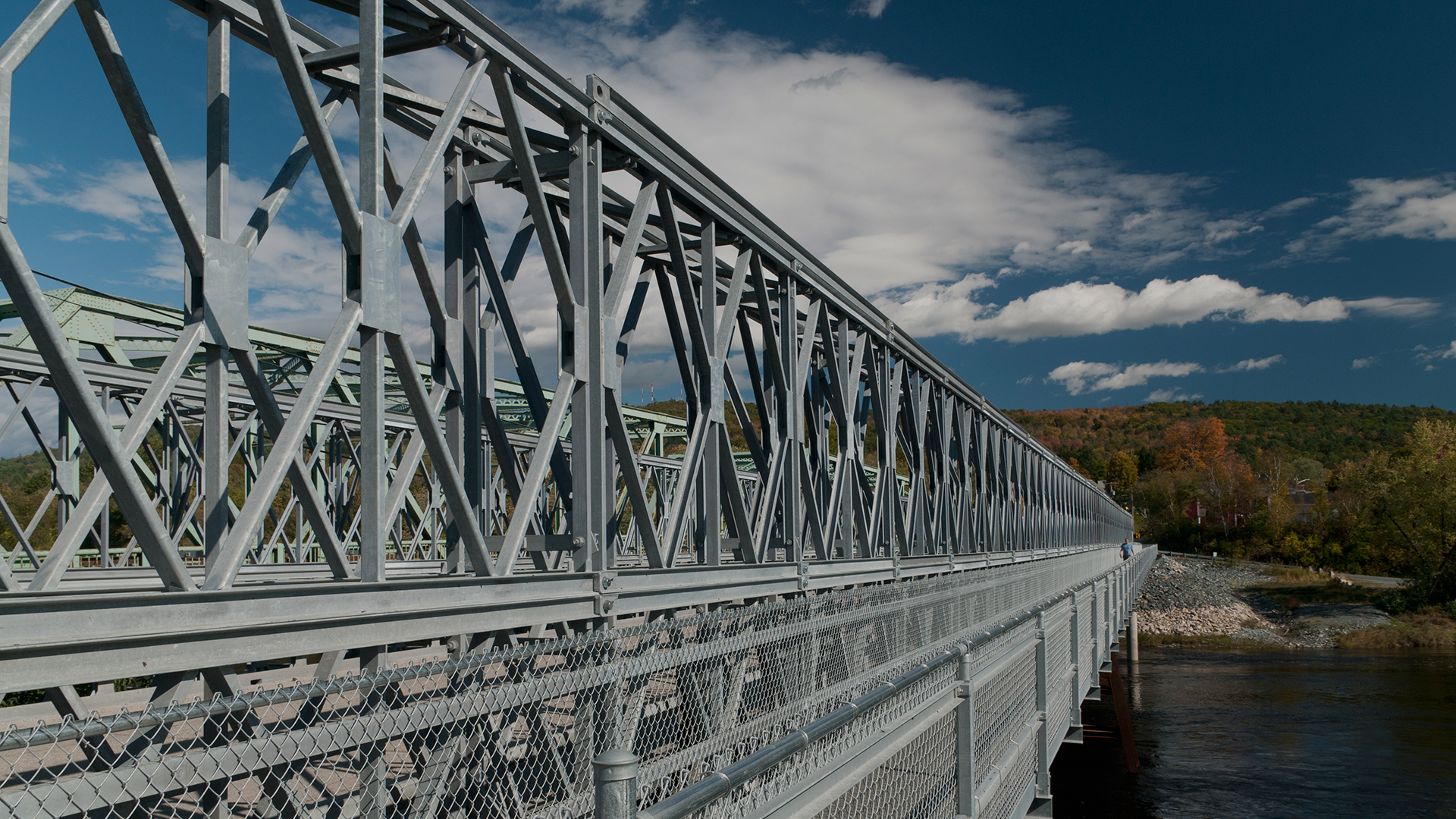 (Bolton, Ontario) – January 03, 2018 – Acrow Bridge, a leading international bridge engineering and supply company, announced today it has supplied a temporary utility bridge to the City of Cambridge in Ontario for use during a project to upgrade the Hespeler wastewater treatment plant.

As part of the upgrade, it was determined that the existing bridge which supports utility pipes over the Speed River was in need of rehabilitation. The contractor looked at various methods to span the gap during the renovation process. One method was to develop a cable-stayed tower and run the pipes suspended across the river. This is the typical method that has been used by pipe utility contractors in the past.

After studying the advantages of using a temporary Acrow bridge, however, the contractor concluded that it was the most efficient method to carry the pipes across the river and had the added bonus of providing workers with safe passage as well. The Acrow bridge was ordered by Facca Incorporated, subcontractor to general contractor Liquiforce Construction, both of Ontario.

The rented structure was 48.8 meters (160 feet) long and 3.6 meters (12 feet) wide. It was able to carry two 460 mm diameter pipes, with a load of 3.2 Kn/m. The bridge was assembled on rollers and pushed half way across the river. A crane (needed only for a few hours) was positioned on the far side to receive the bridge. No work was required to be done from or in the water at any time.

Construction on the modular steel bridge began on September 25, 2017, and the assembly and launch of the bridge was completed five days later. The temporary structure was in service for approximately six weeks and allowed for much quicker completion of the project, as well as a fixed-cost solution.

Said Ryan Wilbur, Project Manager, Facca, “The Acrow bridge was a good fit for the project. We liked the on-site speed and ease of assembly. We will always look into using an Acrow bridge for future projects if we find there is need for it.”

“An Acrow bridge is not just any other bridge,” said Ken Scott, President, Acrow Ltd. “The components that make up the 700XS Acrow Panel Bridge are by definition ‘versatile.’ While our bridges are most often used for vehicle or recreational applications, this project shows that Acrow bridges have the ability to adapt to many different functions.”

About Acrow Bridge
Acrow Bridge has been serving the transportation and construction industries for more than 60 years with a full line of modular steel bridging solutions for vehicle, rail, military and pedestrian use. Acrow’s extensive international presence includes its leadership in the development and implementation of bridge infrastructure projects in over 80 countries, covering Africa, Asia, the Americas, Europe and the Middle East. For more information, please visit www.acrow.com.